Ok, this is my first review in ROMANCE review contest. I like short and informative reviews myself so this is going to be one of them.
As a first, I read Elisabeth Naughton's book called Stolen Fury. I won this book in a contest. Ms Naughton not only sent the book to me in a very short time but also included mouse pad and some promo materials in the package. She also signed the book form me. Don't you just love when authors and people in general are generous? I was very happy to receive this presents. And I must confess that this had made me like the book more before I even started to read it. It's a first book in a new trilogy. Elisabeth was a new author for me, a discovery really!
Here goes the blurb: 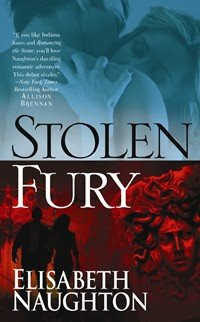 "Oh, is he handsome. And charming. And sexy as all get out. Dr. Lisa Maxwell isn’t the type to go home with a guy she barely knows. But, hey, this is Italy and the red-blooded Rafe Sullivan seems much more enticing than cataloging a bunch of dusty artifacts.After being fully seduced, Lisa wakes to an empty bed and, worse yet, an empty safe. She’s staked her career as an archaeologist on collecting the three Furies, a priceless set of ancient Greek reliefs. Now the one she had is gone. But Lisa won’t just get mad. She’ll get even.She tracks Rafe to Florida, and finds the sparks between them blaze hotter than the Miami sun. He may still have her relic, but he’ll never find all three without her. And they’re not the only ones on the hunt. To beat the other treasure seekers, they’ll have to partner up—because suddenly Lisa and Rafe are in a race just to stay alive"

This is a fast paced book. The main characters, Lisa and Rafe, are very lovable from the start. You can really relate to them. I don't want to post spoilers here, so I'm sorry if this sounds wage. The issues both characters fight with are real and very common nowadays. But although Lisa is tough scientific woman with one goal in front of here, she's underneath very real. She's not soft and that's what I like about her. Although she's been through a lot, she's still strong and independent. It's such a relief to find a strong female character in romance book. Because, this is exactly that - a romance book. Rafe seems like a crook at first, but after you find out what are the reasons behind he's behaviour you just have to like him. There are a bunch of side characters, that aren't shallow but well written and developed, and if you are bad with remembering names (as I am) you will have to be concentrated while you read. I don't recommend reading it in bed because it will keep you wake till early morning hours. It's not one dimensional book, it has layers and the romance part is not in focus the whole time. At the same time, you are not bombarded with scientific stuff but only with necessary things to understand why things happen the way they do and why characters do them. Another thing I like is, although the fire between Lisa and Rafe burns from the beginning it still takes it's time. Nothing feels rushed but on the contrary very natural. The dialogs are well written and there aren't too many sex scenes. I would say this book has a right amount of everything; not too much of anything :) If you like adventurous stories with romance elements, this is the book for you. I recommend it highly.

I give it 5 feathers

The second book in the series is called Stolen Heath and it' comes out on July 28, 2009 and the third book is Stolen Seduction and it comes out in January 2010.
For more information and excerpts here's the link to Elisabeth's web site: http://elisabethnaughton.com/

P.S. You have probably already noticed that English is not my mother tongue, so I apologise for any and every mistake I made.