In The Blood by Adrian Phoenix- ROMANCE review no 2

This isn't an easy review to write. I really don't know what I think about this book, I like it - I don't like it. It's a second book in The Maker's Song series, you can read my 'review' of the first one A Rush of Wings here. Here goes the blurb: 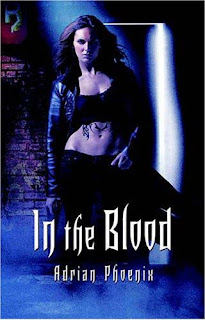 DANTE LIVES.
Vampire. Rock star. Begotten son of the fallen angel Lucien. Dante Baptiste still struggles with nightmares and seizures, searching for the truth about his past. It is a quest as seductive as his kiss, as uncontrollable as his thirst, and as unforgiving as his determination to protect one mortal woman at any cost.
KNOWLEDGE KILLS.
FBI Special Agent Heather Wallace now knows the extent of the Bureau corruption that surrounds her, but worries she is losing the battle. And when Dante and his band Inferno come to Seattle on tour, Heather can't help but be drawn back to the beautiful, dangerous nightkind. But what Heather and Dante don't know is that new enemies lurk in the shadows, closer than they think...and even deadlier than they fear.
DESTINY UNFOLDS.
Shadowy government forces have pledged to eliminate all loose ends from Project Bad Seed -- and Heather and Dante are at the top of the list. Elsewhere, the Fallen gather in Gehenna, intent on finding their long-awaited savior, the True Blood nightkind whom Lucien DeNoir would die to protect. And a damaged and desperate adversary, with powers as strange and perilous as Dante's own, plots to use Dante as a pawn in a violent scheme for revenge. But only one of these lethal forces holds the key to Dante's past -- a key that could finally unlock the secret of his birth and the truth of his existence...or destroy him completely.

It's a complex book, with lot of characters and subplots. I highly recommend that you read the two books one after another. I had a problem remembering details (that are very important when you read these books) because I've read the first one back in April. You have to be concentrated while you read it or you'll very soon lose the track of who-is-who.
I love Dante a little better now, although rings, piercings and collars aren't my thing :) Heather is also well developed character but her sister Annie - is just too predictable. She causes most of the trouble. And you'd think after first or second one she'll try and think, but no-no. She keeps going on towards disaster. Maybe this is because she's bipolar, I really don't have any experience with that, but this looked like too naive behaviour for a woman of my age :) And I really don't like this kissing stuff that Dante has going on - he kisses with everyone in the mouth. It really isn't appealing to me.
I recommend it if you like dark Goth stuff and even if you don't. Just remember - this isn't a midnight read, it takes too much effort to keep up with the story. There are a lot of loose ends that will be (I hope) resolved in the third book BENEATH THE SKIN (coming January 2010).
I give this book 4 feathers and I'll definitely buy the third one (just to find ot how everything ends).
Book info:
Paperback: 400 pages
Publisher: Pocket; 1st Pocket Books Trade Pbk. Ed edition (December 30, 2008)
Language: English
ISBN-10: 1416541454
ISBN-13: 978-1416541455
For more information about the author and her books please visit hers not-so-up-to-date site http://www.adrianphoenix.com/ .
Posted by host at 12:09