I haven't blogged for a while now. I'm sorry about this, but I was so busy at work and with the family stuff that I just couldn't make the time to write something worth reading :) I did, however, manage to read two books (in the late evenings): Storm of Visions by Christina Dodd and Bad Moon Rising by Sherrilyn Kenyon.
Here are my reviews.
First Christina Dodd:
Storm of Visions is the first book in the Chosen Ones series. It's loosely related to the Darkness Chosen series but you don't have to read the first series in order to follow the second one's storyline. 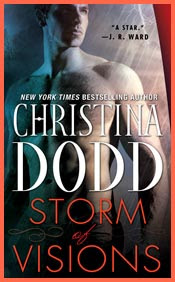 Here goes the blurb:
Jacqueline Vargha has always run from her gift. Now Caleb D'Angelo forces his way into her life, demands his place as her lover, and insists she take her place as one of the Chosen. She flees, he pursues, but she can no longer deny her visions, or the dangerous man who is her downfall — and her destiny.

I had high expectations for this book but they haven't been fulfilled entirely. At first I had a hard time following the story and I couldn't understand why's Jacqueline running from Caleb and then sleeps with him when she actually hates him. We do get an explanation later but it doesn't feel real and believable. There are lots of other characters whose motivations and roles in this book aren't clear to me. I just couldn't feel the chemistry between two leading characters or their connection with other characters. They felt like paper characters without any 'flesh'. And the world building was bad, it didn't excite me like this stuff usually does and makes me read the whole book in one night.
It is relatively good and fast paced book. I've ordered the second one - Storm of Shadows 'cause I remembered that I haven't enjoyed the first book in the Darkness Chosen series but the other three ones were much better.
For more information about the author and her other books visit http://www.christinadodd.com/
I give this book 3 feathers.

In the world of the Were-Hunters, like stays with like. Species don't mix and they definitely don't fall in love. But from the moment Aimee Peltier took in a wounded wolf, her heart wouldn't listen to what her head told her.
However, Fang Kattalakis isn't just a wolf; he is the brother of two of the most powerful members of the Omegrion: the ruling council that enforces the laws of the lyncanthropes. His brothers are the wolf representatives and Aimee's mother represents the Bear clan. Aimee is the heir apparent for her species. There is no way these two can ever be together and they know it.
But when war comes to Sanctuary, the establishment run by Aimee's family, sides must be chosen and enemies are forced into shaky alliances. Aimee is accused of betraying her people, and her only hope is the one man who believes in her. Yet in order to save her, Fang must break the law of his people, and that breech could very well spell the end of both their races.

I adore this author and her books. They are always so emotional and heart wrenching. They use to kept me reading through the night. But this one didn't do it for me. The whole book felt so disconnected and the relationship between Aimee and Fang so unreal. Why they were in love? - I just didn't get it. Their story was mentioned through several different books in the series and this book felt like it had to connect all those stories. And I have to say it failed miserably. This just wasn't Kenyon I fell in love with. Again, those characters were so fleshless and thin I just couldn't believe it. The whole story lacks depth; I mean we didn't get a chance to meet Aimee as a bear. This book could be so much better, this is the first story where bear is the main character, but Kenyon just didn't use all the potentials this book could have.
I give it 4 feathers just because I'm S. Kenyon's fan :)
Book details:
Hardcover: 352 pages
Publisher: St. Martin's Press; 1 edition (August 4, 2009)
Language: English
ISBN-10: 0312369492
ISBN-13: 978-0312369491

For more information about the author and the books visit: http://www.sherrilynkenyon.com/
Posted by host at 15:03